What is “NATURALLY for BIRDS”?

“Under the leadership of award winning Dr Sarah Pryke (at the Australian National University), the Save The Gouldian Fund (STGF) team of scientists has been working on the ecology, behaviour, physiology and nutritional requirements of a range of finches. Part of this work has been researching the wild diets of finches at different stages in their lifecycle (i.e. different times of the year).

Using both the wild and captive bird for research, a range of supplements has subsequently been formulated to meet the natural bio-rhythms of wild Australian seedeaters. When added to a traditional diet, the scientific trials showed dramatic and staggering results in improving general health and well-being of birds, as well as increasing fertility, breeding success, nestling and juvenile growth rates and survival, as well as a number of other health, survival and reproductive-related effects. This has led to the decision to extend this nutritional work across a range of different species, which have very different nutritional requirements. Of course, this means that the team of scientist face the difficulty that more funding is required.

It is against this background that NATURALLY for BIRDS was formed by Mike Fidler and Russell Kingston, with a view to raising funds for nutritional research by marketing the current products that have resulted from research to date.” 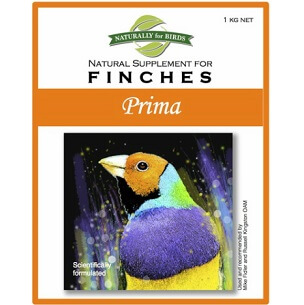 PRIMA has been developed to be used as a ‘predictable’ base supplement or soft food.

PRIMA has been scientifically formulated as a complete soft food that contains ALL the nutrients  that are available to wild birds and necessary to maintain healthy captive stock. With the exception of the AUSTERITY PERIOD, PRIMA is recommended for use throughout the year.

“Prima” may be fed by adding no more than 10% or 1:9 Prima with a sprouted seed/milk seed mix OR in a soft food mix OR with a dry seed mix to which an oil has been added as a carrier for the supplement.

Can Prima be overfed? The answer is NO.

How do you store it?

This product can be frozen or stored in a cool, dry container to maintain quality until used.

With the exception of the AUSTERITY PERIOD, PRIMA is recommended for use throughout the year.
To maximise results during the breeding period, we recommend the addition of PROTEIN BOOST and MICRO-NUTRIENTS.

MICRO-NUTRIENTS is formulated to simulate the nutritional diversity available to wild birds with ingredients chosen to specifically target the following:

MICRO-NUTRIENTS is Rich in Carotenoids. As well as using natural medicines, birds also naturally supplement their normal diet with small amounts of other nutrients. Some species of birds which we keep in captivity never achieve the vibrancy and colour of their wild counterparts. This is due to a lack of carotenes in the standard diet we feed, and some people compensate for this by feeding the artificial colour food commonly given to canaries.

What is not commonly understood among aviculturist is that carotenes are possibly one of the most important components of our birds’ diet and have a direct effect on fertility, the immune system, the endocrine system, cell membrane maintenance and, of course, eyesight.

“Micro-Nutrients” may be fed by adding 5% or 1 part to 20 parts of sprouted seed/ milk seed mix OR in a soft food mix OR with a dry seed mix to which an oil has been added (15ml/kg seed) as a carrier for the supplement. To enhance colour, during moult or during stress add 2 teaspoons of Micro-Nutrients per cup.

To maximise results during the breeding period, we recommend the addition of PRIMA (FINCHES, CANARIES, BUDGERIGARS  & SMALL PARROTS) and PROTEIN BOOST.   With the exception of the AUSTERITY PERIOD, MICRO_NUTREINTS is recommended for use throughout the year. 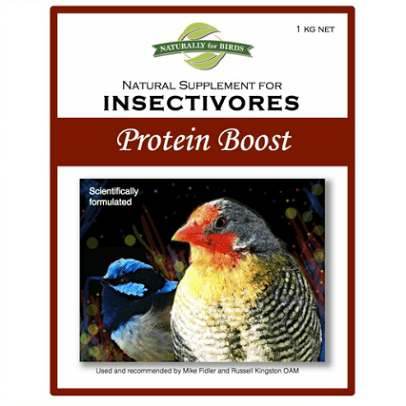 Proteins provides the amino acids needed as building blocks for body growth, tissue repair and to maintain health. Of the 20 amino acids, three particularly important ones for breeding birds are Methionine, Lysine and Cysteine. “Protein Boost” provides all the essential amino acids through readily assimilated protein sources needed for growth and development of nestlings and particularly for more insectivorous species.

Protein Boost is a softfood supplement scientifically formulated to be added to a bird’s existing diet.

PROTEIN BOOST CONTAINS ALL 20 OF THE AMINO ACIDS

The quantity fed of this supplement will depend to some extent on the proportion of livefood in the species diet. Insectivores can be fed 50-70% Protein Boost in a softfood mix, while finches, canaries, budgies may be fed by adding 13% or 1:8 Protein Boost with a sprouted seed/milk seed mix OR in a soft food mix. Protein Boost can also be provided in a separate bowl to allow birds to select it as needed.

Many people think there is only one protein. Actually, there are well over 6,000 proteins, but each one is made up from just 20 amino acids. Most of these are derived from diet but some may be synthesised within the body and some may be created from a precursor element of the birds’ diet.

To maximise results during the breeding period, we recommend the addition of PRIMA (FINCHES, CANARIES, BUDGERIGARS & SMALL PARROTS) and MICRO-NUTRIENTS. 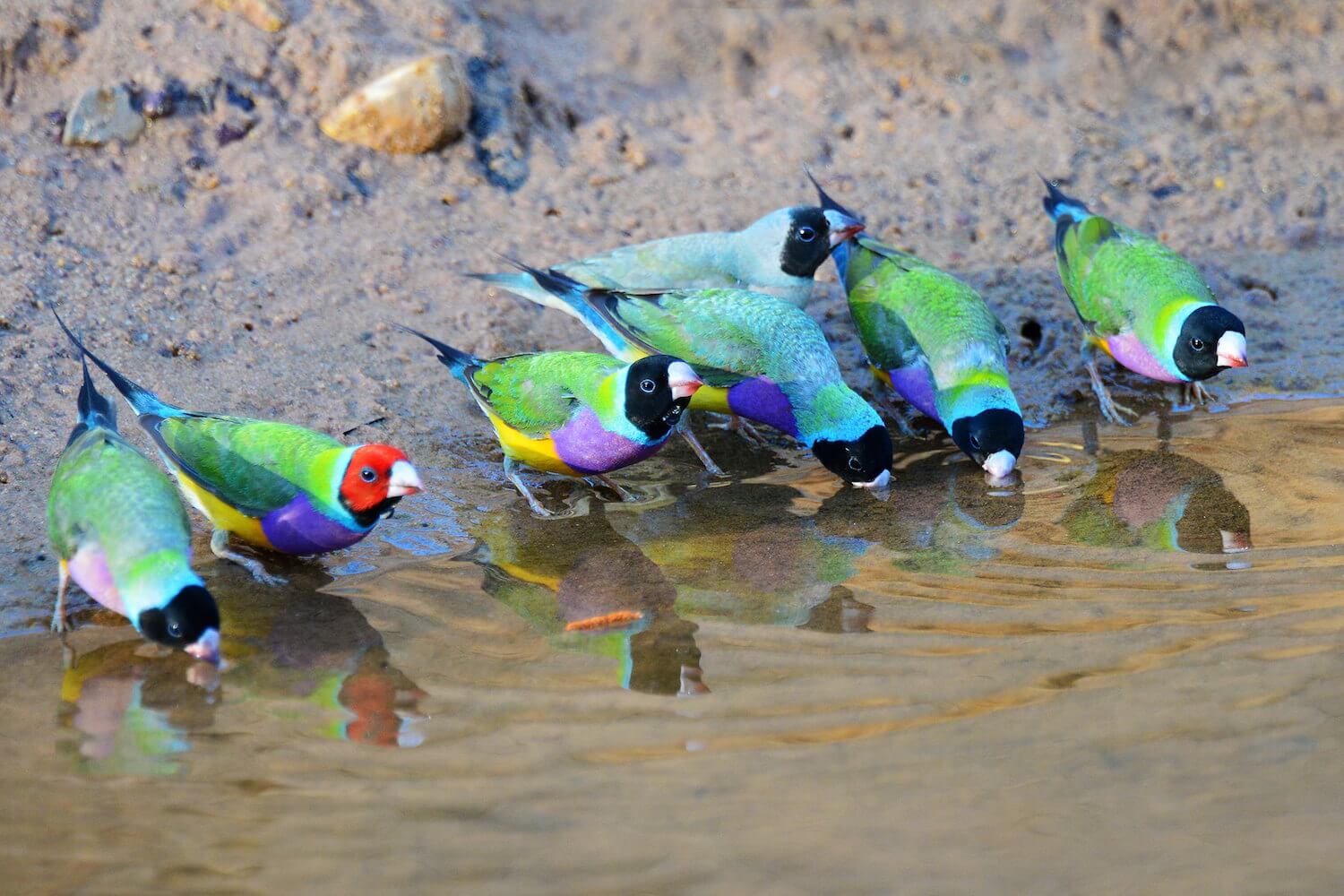 Sadly, outside of the work done by Save the Gouldian Fund (STGF) scientists, little or no scientific work has ever been done on the nutrition of ‘cage birds’. There has been some research on two or three psittacine species, but there has been no work, at least that we are aware of, that has been done on general avicultural species.

Consequently, the diets in general use today have been derived by a combination of experience and guesswork and are actually very little different to those which our forebears devised and used over 100 years ago!!

The research done by the STGF scientists was done primarily on the Gouldian, Longtail and Crimson Finches. The Longtail and the Crimson Finches were chosen so that the nutritional content of their diets could be compared with that of the Gouldian. Obviously, it was assumed that if the nutritional value of their diet was measurably better or different, then this could be a reason why the Gouldian was declining. Although the physical diet of the three species was different, the actual nutritional values were similar.

Subsequent to the field research, the STGF scientists decided to develop a diet for feeding to the captive research stock. They were concerned that a diet which was nutritionally significantly different from the birds’ natural diets could seriously skew the results of some experiments.

Using the data from the natural diets, three supplements were developed (PRIMA, PROTEIN BOOST & MICRO-NUTRIENTS) which when added to a good quality soft food supplement would near replicate a natural diet.

PRIMA, PROTEIN BOOST & MICRO-NUTRIENTS are now available in the U.K and Europe from:

And from Peter Hindle Bird Supplies.

The Supplements are also available in Australia, New Zealand, South Africa and The USA.

COMPETITION: Help us name different flocks of birds & win a prize (Click to find out how)
30th June 2017

Our Favourite Nest Box For The Bird Room
7th February 2017